Finally played through and finished Persona 4 Golden. Everyone kept telling me how great it was and you know what? They were right.

I actually own the original version on PS2 but never got around to it. I actually started playing Persona 3 back when that came out but never finished it so P4 was also placed in the backburner. Years later after Persona 4 Golden came out, I picked it up at launch but I still didn't play it. I was dreading the length and didn't want to abandon it like I did with P3. Yea, it was stupid.

Anyway, after the Persona 5 trailer was released recently it sparked my interest in the game again. I also got a PSTV as a gift for Xmas so I could play it on my TV instead of the Vita. This gave me another reason to finally check it out. It was a perfect time for a marathon since a snowstorm had been giving me days off and nothing else to do. And so it began...

Well, I played the game blind for my first playthrough because I wanted to be surprised. I checked a guide for dungeons I got stuck in but mainly chose whatever decision I thought was right. After a major marathon session of 41 hours and 28 min in 3 days, I hit one of the Bad Endings. That shocked me since I had no idea there were multiple endings. Well, that was a challenge for me to replay in NG+ and get the True Ending. I used a guide so it took about the same length as my blind run even with skipping cutscenes I watched before. Oh man, it was worth it. Not only was the True Ending route longer than expected, but it featured a lot of great moments and has one of the most satisfying endings in all of video games. 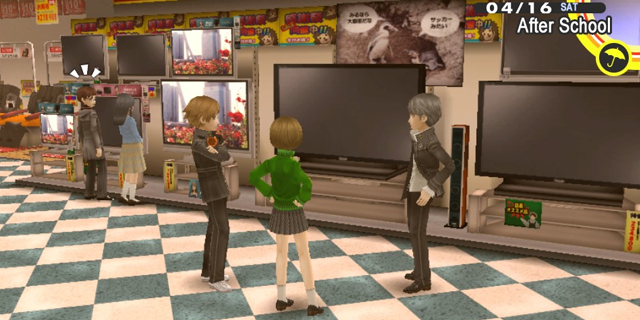 This game is truly special and is one of the most uplifting experiences I had in a while. The messages about friendship, family, helping people etc really made it quite a refreshing experience. While the murder mystery helped hook me into its main story, it's all the daily life scenes with the characters that really shined. So many of these scenes were super well-written and hilarious. I literally laughed out loud every time during these funny scenes. They were so well directed and animated. There's also a lot of touching scenes and conversations that I found pretty relevant even today. Gender issues and self-identity was a really interesting part of the story. I was also really intrigued with how they dealt with it. It was pretty honest and thought-provoking at times. Other games should totally take a look at how P4G handles it. Every character I met were really well developed and were more than what they seemed. I really liked that.

I think my only gripe with the game were the dungeons. They weren't fun to navigate or explore. I enjoyed the combat somewhat but the dungeons took too long and were quite repetitive even with the occasional conditions. Thankfully, the ability to lower the difficulty made them a nonfactor. All the sidequests and various random tasks were simple and not too bothersome. One nice touch were the many costumes you could collect. Not only did it change their look, but it also gave them new animations and win poses. They even talk about them if you initiate conversation with them in the dungeon sections. Really great optional dialogue where they chime in on what you're wearing. The localization was super great. I'm glad I played Golden over the original because they added a ton of extra scenes not found in the original. The amount of extra content is huge and made the game longer than expected during my second playthrough. I'm super curious on how the original game ended so I'll probably check out a LP for that in the future.

And the English VO was excellent. Every character was cast perfectly and made the dialogue even better with their timing. I really loved the characters because of their performances. What a great crew that you end up really caring about. This game also has one  of the most adorable child characters in all of games. I dare you to find someone else as cute and adorable as Nanako-chan. No, don't bother. It's impossible. ^^;

I also need to point out that the soundtrack is amazing as well. Every track is great and never got tiresome. Everything from the intro to the end credits was fantastic. It really gave the game its own identity and is super pleasant to the ears. I really loved the music. Great stuff.

Overall, I'm now in love with the Persona world. I'm going to restart and try to beat Persona 3 now. After that, I'll jump into the Arena fighters and also Persona Q. I really can't wait to see how their story continues in the crossovers. I might also check out the anime since I'm curious how certain scenes played out in animated form. If you haven't played this game, check it out! It's awesome! :D