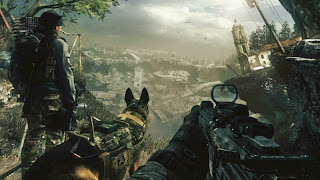 Well, I finished Call of Duty: Ghosts on Hardened last night and it was actually pretty fun. I'm not sure why people were so down on it. Sure, I can understand that it was a step down from the BLOPS series but it had its moments. It felt more like the early CoD campaigns where the missions were a bit more direct and the story was a bit less convoluted. I think fans who liked the series before MW2 would enjoy it quite a bit.

Story - Contains spoilers so skip it if you care.

Story was pretty simple with a good smattering of wild missions. The story of the brothers was not bad and had a semi-good set up for why they were involved. You do play as other random characters from time to time but just like BLOPS, you played primarily as one character and stayed with the same couple of guys so it wasn't super confusing. Also, Riley (the dog) wasn't in the game much. He disappears after the first couple of missions and then suddenly joins you back for a dumb escort mission. A real waste considering how much they got the internet to hype the canine so much. I can only imagine they didn't think Riley would be so popular but it's the internet and they like digital dogs. Maybe the next game will do a better job.

The reason for the war wasn't explained very clearly though. The setting is scary as hell if you're an American but other than that, we're not told why the Federation wants to crush us or where your allies are in all of this. So while the war is much more protracted and larger scale than the previous games, the fact that the USA seems alone in this war was a bit stupid. The ending bugged the hell outta me. Rorke surviving a bullet to the chest PLUS managing to kidnap Logan to be brainwashed made ZERO sense within the context of the story. Not only did it undermine the awesome feel of completing the mission at the end but it was a very clumsy set up for a possible sequel. I did not like it at all. Why did you guys do that?

Anyway, some missions were better than others. I really enjoyed the stealth missions and all missions where you had to creep around. They were well scripted and had really great pacing and tension. I really didn't mind just following a dude around while trying to avoid guys.The one underwater and infiltrating the base as enemy soldiers were some highlights. The shoot out in space was unexpected and awesome as hell. I'm not sure how they'll outdo that in later installments. I mean, how could you beat that?

The missions were your typical follow-the-leader and shooting most guys or creeping your way to the objective. It was pretty entertaining for the most part. My major gripe is that this game suffers like most past CoD games where there's a few choke points. The enemies near the end were ridiculously accurate and will kill you instantly even after you spawned back sometimes. I can understand making the them tougher but restarting a couple of times from some random dude who suddenly decides to target me only while my buddy is next to him is very annoying. The first 2/3 of the game felt well balanced even on Hardened but the last 1/3 did piss me off a few times. It wasn't as bad as some previous CoD games though. I'm also happy I didn't encounter any spots where infinite respawning enemies occured. Good on ya devs. We don't need that shit in these games. The AI is alright but a bit brain dead at times for both sides. I know I'm the hero but at least put some effort into the suppressive fire.

Anyway, even with my complaints, the missions were still relatively entertaining. Riley was highly underused tho. He had a cool mechanic that was abandoned after the initial 1/3 of the game. So much potential! Boo.

The CoD engine definitely looks dated now. It doesn't look super great even on the PS4. There were some impressive destruction but the overall look was a bit muddy in spots and I saw jaggies in the distance for most objects. Even with all the minor enhancements to the PS4's visuals, it looked last gen. Here's hoping the next game uses a brand new engine. The framerate held up really well for the most part so that's a plus.

The audio is just as impressive as the other games. Some really great surround and the bass was also great during major explosions. The voice-over was great as well. It's your typical soldiers yelling at each other but they were good at it. Even when the visuals disappointed me, I could rely on the audio.

Game was still fun and had an entertaining story. It doesn't beat out the MW games with its over-the-topness nor did it beat the BLOPS games with its storytelling but it was still good. Certain missions could've been better and the ending should've been changed. But overall, I was satisfied with it. Well worth checking out if you're a fan of the previous CoD single player campaigns.